The winter break is round the corner. You wish to buy a new gaming console. You start looking out for the same and finally shortlist some of the best ones. You come across two names,viz, X-Box and PlayStation, but which one of these? For the past couple of years, this has been the biggest debate among the game-freaks out there. Both of these have some really good features. However if there are some pros then there are cons as well. Both X-Box as well as PlayStation has a number of similarities in some ways and some factors which makes them drastically different from each other. Before buying any of the above consoles, it is imperative that you know all the facts about what they offer and what they don’t.

For the past one year, PlayStation is selling out almost double than its Microsoft counterpart. PlayStation has sold almost 41 million units of PS4 worldwide as compared to X-Box One’s 21 million units. However this doesn’t make PS4 the best console system. Microsoft has recently released its flagship product ‘X-Box One S’ which is quite slimmer than its previous version and more importantly it adds support for 4K Ultra-HD playback and also supports HDR games. This is sure to give Microsoft a definitive edge over its rival. Additionally, Microsoft has added some exclusive games for the X-Box One S. Sony doesn’t lag behind either. Sony is also set to release its new system ‘PlayStation NEO’ in the near future which comes with 4K support alongside ‘PlayStation VR’. From customer’s point of view, the best thing to be noted is that both these new systems are coming with backward compatibility. For those who don’t know, Backward Compatibility is defined as a console’s ability to play games initially designed for older systems. 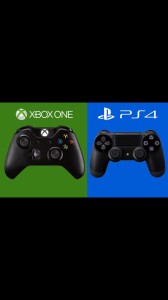 Just to help you out, we have done a detailed analysis of what each console has to offer and what all things you should consider before spending your hard earned money on buying your Dream Console.

This factor will depend on your taste and choice of games. Both X-Box as well as PlayStation has a wide range of blockbuster games to choose from. Although almost all third-party games are available on both X-Box and PS, both have their own set of exclusives. The list of games is going to be a never-ending one however, currently X-Box holds the edge over PS in terms of exclusive games. This may change in the near future as PS is set to launch the largely anticipated games like ‘Uncharted 4’, ‘Street Fighter V’ and ‘The Last Guardian’. So X-Box may be your immediate choice given its current set of games but for sure PS is not going to lag behind. In a Nutshell, this will largely depend on your taste.

I think PlayStation definitely looks as the clear winner here with its slimmer, lighter and easily portable design whereas the X-Box is slightly bulkier and needs an external power source. Both the consoles start with 500 GB of storage which can be expanded up to 2 TB through an external hard drive. PS 4 is going to be the first console which offers Virtual Reality when it launches it ‘PlayStation VR’ this year. Overall PlayStation has a more attractive, feature-rich controller and it’s the only one which supports Virtual Reality.

Both X-Box One as well as PlayStation come equipped with an octa core processor and 8 GB of RAM. Though games generally look great on both the consoles, PS nudges ahead here with its 1080 pixel resolution. X-Box One still offers 900 Pixel resolution. PS 4 PRO which will be launched soon will allow 4K gaming whereas Microsoft will answer it next year with its ‘Project Scorpio which will be more powerful than Sony’s PS 4 Pro and probably more costly too but you can always check out dealvoucherz for voucher codes to get discounts. Overall if we see, Sony has an advantage over Microsoft in terms of performance due to its higher resolution.

The PS 4’s interface is designed to be so simple and accessible that anyone operating it can figure it out quite easily. On the other hand X-Box’s interface is quite complex as compared to PlayStation but it offers more functionality. Microsoft has tried to put the interface in line with Windows 10 which makes the UI run faster and smoother than before. The new Kinnect’s voice command is an outstanding piece of technology and it surely gives Microsoft the edge ahead of PlayStation.

Taking all the factors into consideration, there’s no denying the fact that both consoles offer a lot of features which may be similar or may be different from each other. However, personally, if I were to make a choice, I would go with PlayStation 4. X-Box One might be better for non-gaming activities with its host of online services, but PS holds the edge over Microsoft in the near future with its Virtual reality Console coming up shortly which also supports 4K gaming. Ultimately both PS and X-Box devices are quite good and are getting better by the day so you may follow any brand loyalty if you have any,  but if you’re looking to game, I would suggest go with PlayStation 4.